Joe Biden Victorious in Landslide Among Both Students and Faculty

In a reversal from 2016, students chose the Democratic candidate

For just the third time in over thirty years, the students at the upper school have voted for the Democratic candidate. Not only was former Vice-President Joe Biden surprisingly victorious with the students, but he won handily. Nearly 55% of the students went for the midwest native, a 15% advantage over the incumbent Trump. Third party candidates took home a combined 6.8% of the popular vote.

Less surprisingly, Biden won the teacher vote as well; 50 of the 56 responses were for Biden, while the remaining 6 went to Trump. 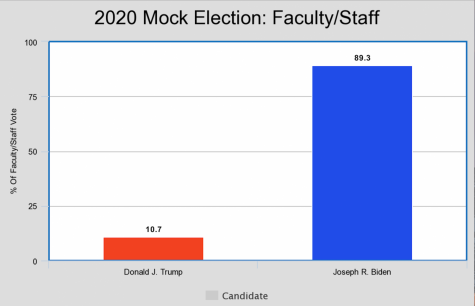 The results are especially surprising given how the student body has voted in the past. According to longtime drama teacher Mrs. Pribble, the student vote has gone red every year since 1988, except for both of President Obama’s elections. Perhaps the greatest shock comes when examining the 2016 vote. In his first presidential campaign, President Trump narrowly defeated Hillary Clinton by three points, 43-40.

The Democratic gains made among students weren’t stolen from the other side either. Between 2016 and this year, Trump lost only 4 percentage points. However, the percent of students voting for third party candidates is only a third of what it was four years ago. It seems that many of the students who were unsatisfied with both Clinton and Trump in 2016 were much more content with Biden, sparking the Democrat’s 15 point jump between elections.

As the national election continues, the values of our school have never been more important. The sense of responsibly in seeing such a strong student turnout in the vote was accompanied by the loyalty and integrity in student’s civil discussions around the school. Students have abided by Dr. Daughtrey’s reminder; uphold our values, and the community will only grow stronger.